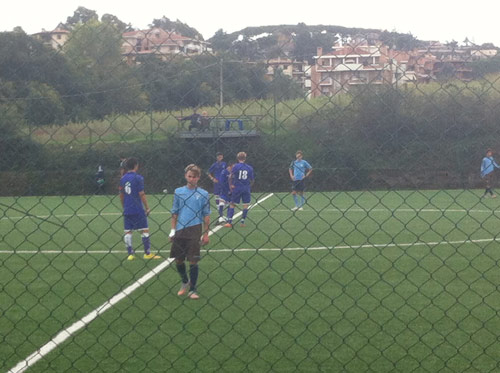 Read all about the trial, the facilities, our run ins with the first team athletes and the fantastic Italian food.

The trial lasted about 2 weeks. Kian trained with the U17 Nazionale Academy team as well as the Primavera team coached by Simone Inzaghi. Lazio has been dominant in the last 2 years in the primavera league winning cups with relative ease. The primavera team focused a lot on strength and conditioning with a focus on high pressure situations. It was fantastic training and the talent on the field was unbelievable, the net worth of that team alone is somewhere around 2 million Euros. The experience was similiar with the Nazionale team. Both teams exemplified extreme skill and the training was also top notch.

Kian tried out for the striker role and because he was not accustomed to playing striker (he only played a bit of striker when he was younger) it was an uphill battle. Fighting injuries from home and a small ankle injury while there Kian did his best to keep up. He impressed the Academy staff but was not able to produce results enough for Lazio to offer a contract. It was an amaizing experience filled with highs and lows.

Kian got to play against the first team of Lazio with the primavera team and at one point was marking Klose. I will attempt to get the video of the game and I did take some pictures which I will post below. We also did an awesome tour of Rome going up all the way to St. Peters Church highest spot and overlooking all of Rome was tremendously difficult but worthwhile. I have posted some pictures below.

We also got to eat at the restaurant where the first team eats and transportation was provided for us the entire time. We met a lot of professional athletes and learned a lot about marketing contracts. The food was incredible at this local restaurant close to our hotel called Mr. Pizza. One note about the water, it has a lot of sodium. You need to find bottled water with low sodium as it may affect your performance if you are an athlete (If not salt tastes good, enjoy).