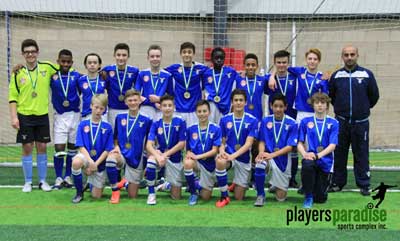 Through a tough day of many injuries and a long day, the 2002 team ended the day as Champions of the players Paradise March break tournament!

We had 3 players injured throughout the day which left our bench near empty for the final game.  It was a tight battle against Oakville U14 and ended up going into a shoot out....and I am happy to report that Eurostar won!